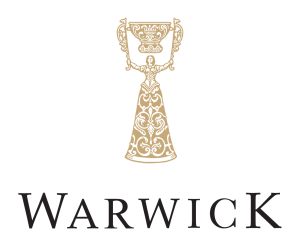 Warwick emerged on the forefront of South Africa’s wine scene in 1964 when Stan and Norma Ratcliffe bought the estate and started developing the land with an extensive focus on the classic Bordeaux varieties: Cabernet Franc and Cabernet Sauvignon.

Through determination and commitment, Norma Ratcliffe became one of the Cape’s first female winemakers – and one of its most illustrious wine personalities, whose legacy is immortalised in the Warwick “First Lady” range.

The first wine under the Warwick label was released in 1984, then named “La Femme Bleu” – “Blue Lady” as it is known today. Two years later, in 1986, the Warwick Trilogy – a three varietal Bordeaux-style blend – was released and has since been recognised as a truly iconic wine, with multiple vintages adorning some of the greatest wine lists in the world. Throughout the years, Warwick’s wines have won many awards, firmly establishing the brand as a South African icon.

The First Lady range of wines are a tribute to Norma Ratclife. The founder and first winemaker at Warwick estate and of the first women to make wine in South Africa. As betrayed by its colour this Is a bone dry rose with amazing aromatics. It is made with sunny days in mind, it inspires a second glass.

The First Lady range of wines are a tribute to Norma Ratclife. The founder and first winemaker at Warwick estate and of the first women to make wine in South Africa. The First Lady Sauvignon Blanc is the latest edition to the first lady range. Currently in its third vintage it has established itself very quickly as one of the most popular wine on the estate.

The First Lady range of wines are a tribute to Norma Ratcliffe. The founder and first winemaker at Warwick estate and of the first women to make wine in South Africa. Cabernet Sauvignon is the first wine made under the Warwick label. It is fitting that this is the best known and most popular wine from the estate.

The First Lady range of wines are a tribute to Norma Ratcliffe. The founder and first winemaker at Warwick estate and of the first women to make wine in South Africa. This wine is the exception to the rule for many that do not enjoy Chardonnay. It is elegantly crafted to highlight the amazing fruit and texture of Chardonnay.

The Three Cape Ladies as of 2015 is a three-varietal Cabernet Sauvignon led Bordeaux style blend. A further sanctification of the Stellenbosch terroir and its ability to deliver fantastic appealing wines. Even James Bond famously succumbed to the appeal of the Three Cape Ladies.

The DNA of the single vineyard Cabernet Sauvignon from the estate goes back to the very first wine produced under the Warwick label, when it was released in 1984 – then named “La Femme Bleu”. An example of Quintessential Simonsberg Cabernet powerful and rich, with tremendous ageing possibilities.

The Warwick Trilogy was first produced in 1986 as the flagship Estate wine. There has been a Trilogy every vintage ever since. It was launched as a three-varietal Bordeaux-style blend, predominantly Cabernet Sauvignon, until the 2015 vintage when Cabernet Franc led the blend for the first time.

The Warwick harvest team pick our Pinotage fairly ripe, giving lashings of rich black cherries and ripe strawberry elements, as well as those tell-tale cured meat aromas that Pinotage delivers. The grapes spend as long as two weeks on skins, lending the wine a spectacular crimson colour, as well some powdery tannins. The wine goes through malolactic conversion, adding a velvety texture, and hints of milk chocolate. Finally, all components aee aged in oak, adding a silky finish with hints of spice.